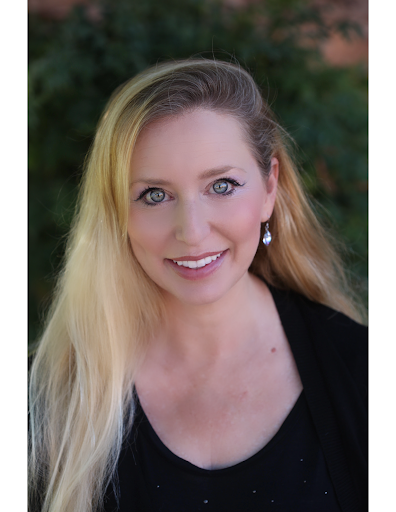 As a self described pleasantly persistent perfectionist with a passion for the arts, Karin Edwards likes purple, pets, things that sparkle, alliteration, and comic sans font. She also likes people! People are her favorite.

Karin grew up in a family devoted to service that has taken her all over the world. Her parents met on the hospital ship Hope and she grew up following her family all over the globe. She claims American Samoa, the Dominican Republic, Haiti, and tribal lands in Oklahoma as stops in her childhood while her parents worked medical magic. The best souvenir from her travels is her younger brother who is adopted from Western Samoa. As an adult she spent 20 years touring nationally and internationally with Broadway shows. Karin is grateful to be a St George resident and is working on a long term plan to have all of her family become residents of the St George area.

Karin has a background in organizational communication and psychology and has spent 20 years turning that background into a tool to connect people to each other and the arts. She is currently pursuing a master's in public administration to help her be a more effective advocate for arts in her community.

Karin spent many years with Tuacahn Center for the Arts in many capacities but most recently as the Company and Hospitality Manager. She currently works as the Arts Programming Coordinator for Utah Tech University where she works with The Celebrity Concert Series, UT Live, DOCUTAH and the OC Tanner amphitheater. She can also be found working as the Production Manager for SGMT, running auditions or costuming for Encore Performing Arts, stage managing for The Stage Door, or bedazzling shoes for a High School dance. Her masterpiece is her 15 year old son, Kadence.